| Drone Diaries of The Bahamas | 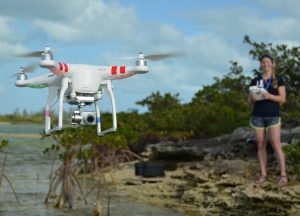 Many marine megafauna populations, including sea turtles, ray, and sharks, are sensitive to both local and global impacts and yet, remain relatively difficult to monitor. With funding from Save Our Seas Foundation , my collaborators and I tested the efficacy of a quadcopter drone to collect megafauna abundance data in multiple shallow-water habitats in the realistic background variation of shoreline development. We repeated drone surveys at three paired high and low human population sites. In short,  the drone imagery allowed use to monitor these species. In addition, there were also noted patterns in the occupancy of our focal species, finding higher abundances of all species in our low human population sites compared to high human population sites.

Our results highlight the ability of consumer-grade drones to accurately and efficiently estimate the abundance and distribution of large-bodied elasmobranchs and sea turtles in shallow water habitats. Further, our study supports their capability to evaluate issues related to the conservation and management of nearshore ecosystems. 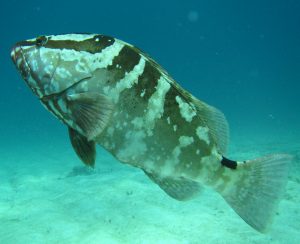 Coral reef ecosystems are highly diverse habitats that harbour many ecologically and economically significant species, yet they are currently under threat from multiple stressors including overexploitation of predatory fishes and habitat degradation. While these two human-driven activities occur simultaneously in nature, they are often studied independently or are limited to simplified interaction webs. Using a factorial design, we examined effects of predator presence, habitat complexity, and their interaction on patch reef fish communities in nearshore ecosystem on Great Abaco Island, The Bahamas. We manipulated the presence of Nassau groupers (Epinephelus striatus), a large-bodied reef predator that is endangered largely due to overharvest, and manipulated patch reef complexity using artificial reefs (composed of PVC and cinder blocks) to reflect either high or low complexity. To assess changes in fish community composition measured fish abundance, species richness and evenness, and characterized fish community composition. A major finding from this study was that we found reef complexity and predator presence to have a positive, additive effect on total fish abundance, likely from ample refugia availability and non-consumptive predator effects. In the context of coral reef conservation, our study suggests that to maintain a healthy, productive reef system, we need to manage stressors that affect both the bottom and top of reef food webs. 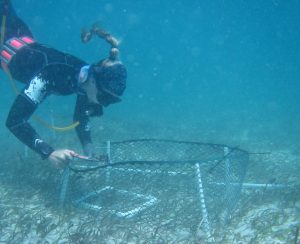 Humans have altered coastal ecosystems through changes in top-down and bottom-up processes via a myriad of stressors including overfishing and eutrophication. High fishing pressures can hinder food web stability through shifts in predator-prey interactions, as well as have strong effects on ambient nutrient dynamics by removing fish-derived nutrients which are known to aid in primary production. Human nutrient loading alters primary producer communities through increasing nutrient availability and changing its stoichiometry (nitrogen to phosphorous). Even though there is evidence that primary producers can also be strongly influenced by fish- and human- derived nutrients, most research still focuses on effects of human nutrient loading. This creates a potential gap in our understanding of the complete and cascading effects of human-driven stressors. Here we tested the relative role between reef fishes direct, top-down (predation) and indirect, bottom-up (altering seagrass vegetation composition and density) control on a Thalassia testudinum seagrass epifauna community in the context of different ambient nutrients. To mechanistically separate fishes’ top-down versus bottom-up effects, we conducted surveys and embedded a predator exclusion experiment within a long-term (>7.5 yr), full factorial field experiment that manipulates local, ambient nutrient availability (fish- and human-derived nutrients). 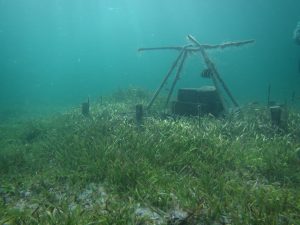 Our results show that in low nutrient waters, seagrass epifauna invertebrate communities are only affected by predation. Total invertebrate biomass increased by 166% when predators were excluded. We did not observe any indirect, cascading effects on invertebrate communities from the direct effects nutrient shifts have on seagrass primary producer communities. Overall, our study offers a next step forwards to understanding how multiple anthropogenic stressors mechanistically alter important top-down and bottom-up process through multi-level interaction webs. 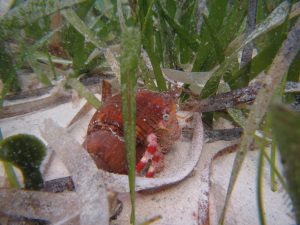 Marine fish populations have suffered severe declines worldwide due to a myriad of stressors including overfishing and habitat degradation. One way to mitigate the loss of critical habitat is to introduce complex, artificial structure. For this management strategy to be effective it’s key to first understand any potential direct or cascading consequences of introducing a non-native structure to an area of interest.

Here, we investigate how artificial reefs within a back-reef system adjacent to shoreline development may alter the ecology of the Critically Endangered Nassau grouper (Epinephelus striatus). Using stomach contents and stable isotope analyses combined with acoustic telemetry, we examined changes in the diet and movement behavior of juvenile Nassau grouper (20-42 cm total length) residing on natural and artificial reefs. 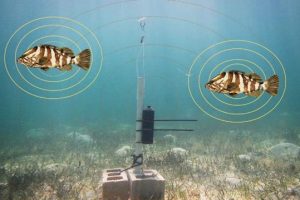 Over a seven month study period, we found individuals located on natural reefs were larger on average than individuals observed on artificial reefs. Our examination of stomach content showed that grouper diet depended on individual fish size (length). Through light stable isotope analysis (δ13C & δ15N), we found reef type altered the habitat in which groupers hunted for prey. Specifically, natural grouper reefs preyed on nearby fauna within reef habitat while artificial reef groupers tended to consume prey from seagrass beds. Lastly, for shifts in grouper movement, reef typed altered how often individuals resided away from reef habitat. In the context of conservation and management, our findings demonstrate artificial reefs may be a simple tool for wildlife managers to apply in tropical nursery habitats that have experienced declines in complex habitat. However, due to changes in foraging habitat and movement behavior of a large-bodied predator species, we also suggest that managers should consider the potential cascading consequences for changes in inter- and intraspecific species interactions before artificial are introduced into a system, regardless of introduction purpose, e.g., conservation and ecotourism.